Establish a vibrant social media presence for an independent board game company, starting from zero fans/followers and minimal brand awareness. Develop brand voice, amplify existing marketing efforts, and cultivate relationships with partners and influencers — all in less than an hour a day. 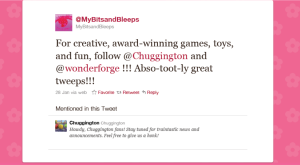 If you would like to talk more about cultivating social media community without a big budget, please get in touch.

I could make a list of 100 things Molly Moon’s Homemade Ice Cream has done right in terms of word-of-mouth marketing, really from the moment they opened. Their stylish scoop shops are loaded with talkable details like the irresistible smell of fresh waffle cones baking, a strategically placed low window where toddlers can peek in to see the ice cream being made, and smartly designed posters showing all the wholesome, local sources of their ingredients.

Of course, Molly Moon’s also makes seriously kick-ass ice cream with inventive, memorable flavors like Salted Caramel and Honey Lavender that get people literally lining up around the block on Seattle summer days — which, of course, drives interest and gets even more people lining up — you get the picture.

Today I saw a Tweet that Molly Moon’s was offering free scoops of one of their signature flavors, Scout Mint, in honor of the 100th Anniversary of the Girl Scouts. It happens to be about 40 degrees and pouring — certainly not a day that would normally make me think “ice cream.” But this sounded so fun and compelling that I surprised the kids with an after-school stop. Here are five things I loved about this inspired event.

Those who follow word-of-mouth marketing best practices know well how important it is to have offline events in the mix, but I think Molly Moon’s gets a badge for this one: a sweet, simple, smart concept, perfectly executed. Thanks for those free scoops, Molly Moon’s! We’ll be back.

There’s nothing quite like a big conference or trade show to gather fresh inspiration, make new connections, and plug into the shared energy of people with a common passion getting together to talk shop. Twitter can be a surprisingly powerful tool to fine-tune your event plan and make your presence even more successful. Here’s how.

1. Keep tabs on key contacts: Before you go, look up the Twitter handles of everybody you are planning to meet with and gather them into a Twitter list. Before your meeting, take a quick look at your contact’s tweet stream to get some context and look for opportunities to make a memorable impression. Is he frustrated by slow wifi? You can commiserate. Energy flagging? She’ll be delighted if you have a cappuccino waiting.

2. Tweet and retweet generously: You certainly don’t want everybody in the booth heads-down tweeting, but be sure to tweet throughout the event, always using the official event hashtag if there is one. Be generous in your approach, retweeting quality tweets even if they are coming from a competitor. Active tweeting gets you on the radar of event attendees and sets a positive, engaged tone.

3. Listen for relevant trends and hooks: Save the event hashtag stream using a client like HootSuite or TweetDeck so you can keep an eye on all the tweets about the event. When you notice someone tweeting about something that’s relevant to your offering, extend an invitation to stop by your booth for a demo. Make it personal, including your booth number and who to ask for.

4. Be on the lookout for new influencers: Even if you came with a lengthy list of key contacts and planned meetings, if you’re listening actively you’ll identify plenty of new influencers to build relationships with. Keep an ear out for bloggers, journalists, or critics who are actively tweeting about the trends or topics you are addressing, and extend a warm personal invitation to stop by for a chat.

5. Follow up: Trade show attendees meet dozens or even hundreds of people in a short stretch of time, so a follow-up tweet is a quick way to solidify your connection and make it easy to keep the conversation going. Make it warm and personal rather than generic–for example, “Stephanie, thanks for stopping by to play the new Dr. Seuss game! Hope you find some more comfortable shoes for tomorrow.” Of course Twitter shouldn’t replace other follow-ups, but it can be a powerful way to punctuate a positive meeting.

Bonus Tip: With some close coordination, some or even all of this Twitter dot-connecting can happen remotely! In some cases this setup can even be preferable, since on-site wifi speeds tend to be sluggish and schedules packed. As long as your Twitter point person can coordinate as needed with booth staff via email, phone, or text, you can drive a very effective event Twitter presence from miles or even time zones away.

I’ve always found that constraints lead to creativity, and Twitter is no exception. With only 140 characters to play with, I frequently have to do some creative editing and thinking to say what I want to say. And as a habitual writer of far-too-long long emails, I enjoy tweeting because it challenges me to be crisp and nimble with language.

I also enjoy seeing some of the creative things people do with the format. Here are a few.

1. @Sockington: Sockington, identified in his Twitter bio simply as “Jason Scott’s cat” from Waltham, MA, has a one-of-a-kind voice–and close to a million and half followers. Sample tweets: “SURPRISE NOT A GREY PILLOW it was me SO EASY TO FOOL YOU ARE this is totally why I run things around here” or “awaiting petting THERE WE GO hmmm have had better NO THAT DOESN’T MEAN STOP”

2. @VeryShortStory: So there are short stories, and there are tweet-length stories. For example, “I traced my finger along the map imprinted on your back. Soon I’d seduce your sister. With her map half, your father’s riches would be ours.” Not quite as short as Hemingway’s famous six-word story, but impressive all the same.

3. @JQAdams_MHS: The Massachusetts Historical Society regularly tweets excerpts from John Quincy Adams’s diary. Now truthfully, this is not a book I would be inclined to have on my bedside table, but reading a tidbit every day is fascinating. For example, “02/15/1812: Detecting domestic thefts and impositions. Dined at Raimbert’s. Took Charles with me. Montreal gave him a Magic Lantern.”

4. @520_bridge: This is a landmark in my city, Seattle, and somebody has taken to tweeting as the bridge. And, amazingly, people have taken to tweeting to the bridge. For example: “@520_bridge What’s your deal today?! Crossing you for 15 minutes!” To which the bridge responds, “Sun for first time in 5 days = peeps forgot sunglasses!” (For those who don’t live in Seattle, this is actually a completely plausible explanation.)

There are a lot of creative possibilities here, whether you are a content creator game for a unique challenge, an author working to develop voice for a character, or the keeper of some unique intellectual property that might be parceled out over time, tweet by tweet.